Comments and discussion on any and all topics.
Post Reply
139 posts

This is the round it fires... http://en.wikipedia.org/wiki/20_mm_caliber

Check out the size comparison pic

so just consideration here: it wont be anytime soon, since im getting a second knife (this one, its beautiful: http://www.benchmade.com/products/62) but ive been looking into getting a gun, for both learning how to shoot and for carrying use.
i dont want a rifle.
so question: ive always enjoyed the idea of a 6-shooter, but whats the gun that you mates would suggest? have to be moderately affordable, yet effective.
Top

rofl a gold deagle, well played.
when it comes to revolvers, I'd prefer something more powerful than not, say, a .357 or .44, either one. not really to picky when it comes to size, but I do enjoy the medium/large frame shape. something like this one?
http://www.taurususa.com/product-detail ... series=LF2

when it comes to pistols, I'd rather have something useful than small. size isnt such a decision maker for me. function over form, eh?
Top

Well it sounds like you aren't interested in concealed carry, so let's look at full-size and compact semis. 9mm is pretty much your standard round when it comes to semi pistols. 40S&W is a powerful round, but when it comes to range time you aren't going to enjoy the cost increase per round. Standard FMJ 9mm rounds are decently priced (I recommend , for example, and it's available at Dick's and Walmart). If you want to load defense rounds for when you're at home, there are some really powerful hollow-point available. When you see "+P" it is referring to "plus pressure", which means that there is more black powder packed into a cartridge than a standard round. More powder = bigger bang, thus more energy is transferred onto the bullet and into your target. The hollow-point simply refers to the tip of the bullet. They are indented and grooved so that when the bullet hits a fleshy mass of some sort, the bullet will leaving a nasty ass wound.

Now for my semi auto picks...

Sig:
Full size...seriously you can't go wrong with the . I'm biased, but fuck it! This is the best gun you can buy. It's fucking expensive, though.
Compact...
Subcompact, ehhhh, well I'd go with the new subcompact but it ain't out yet.

Springfield:
. Jif has , he can answer questions if you have any.


Questions? ASK! I'd honestly go with a Glock 19 or a XD9 since this is your first gun. 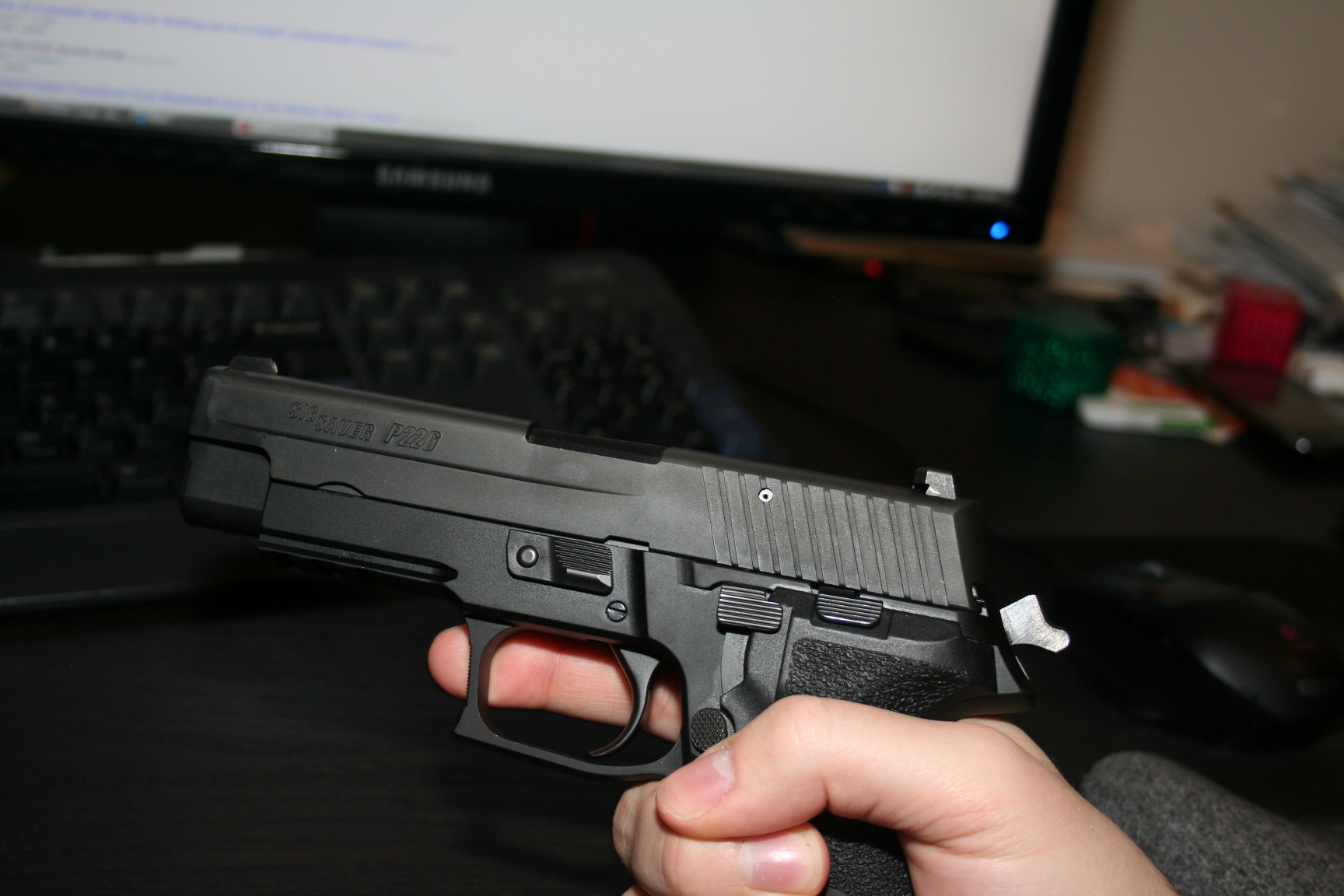 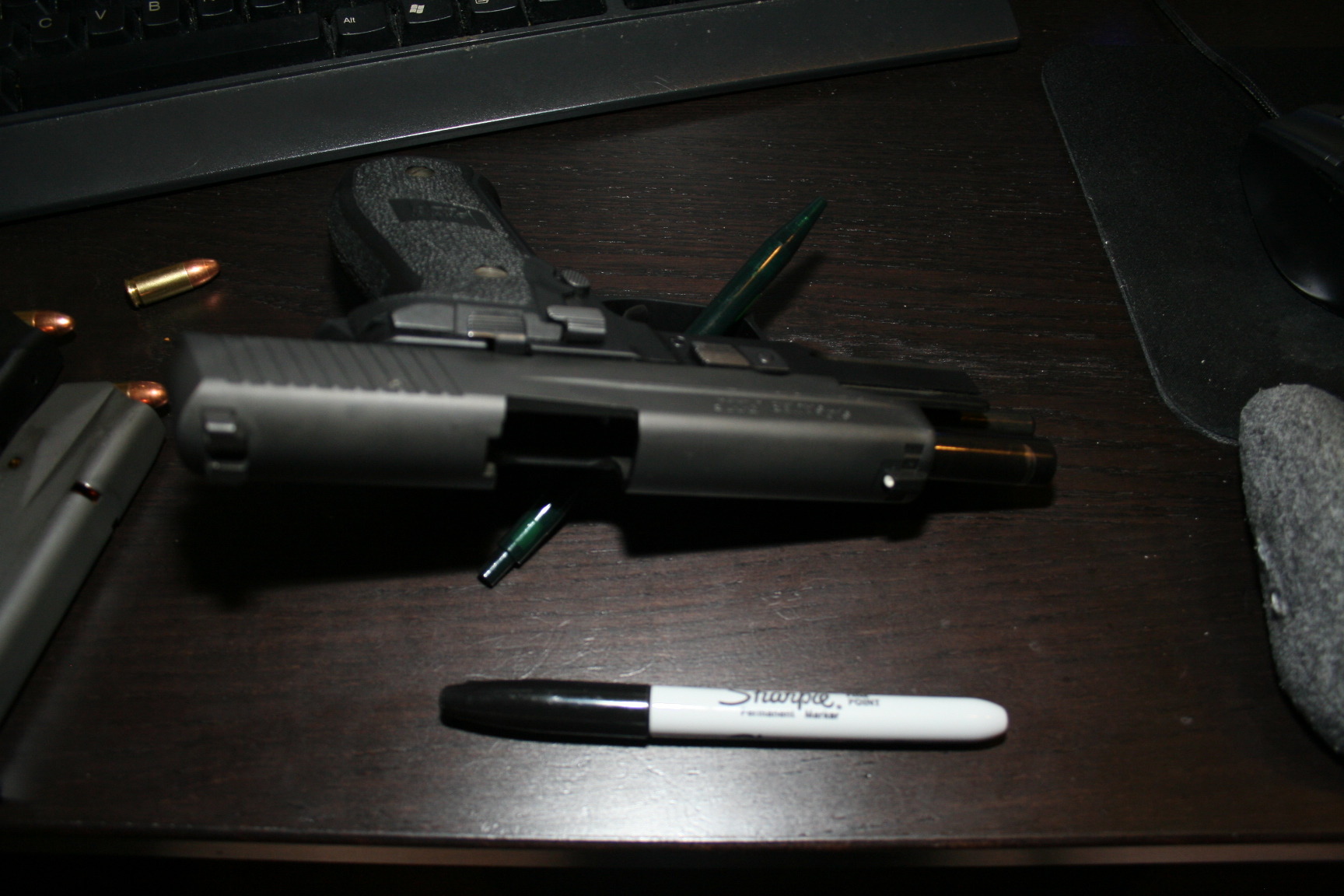 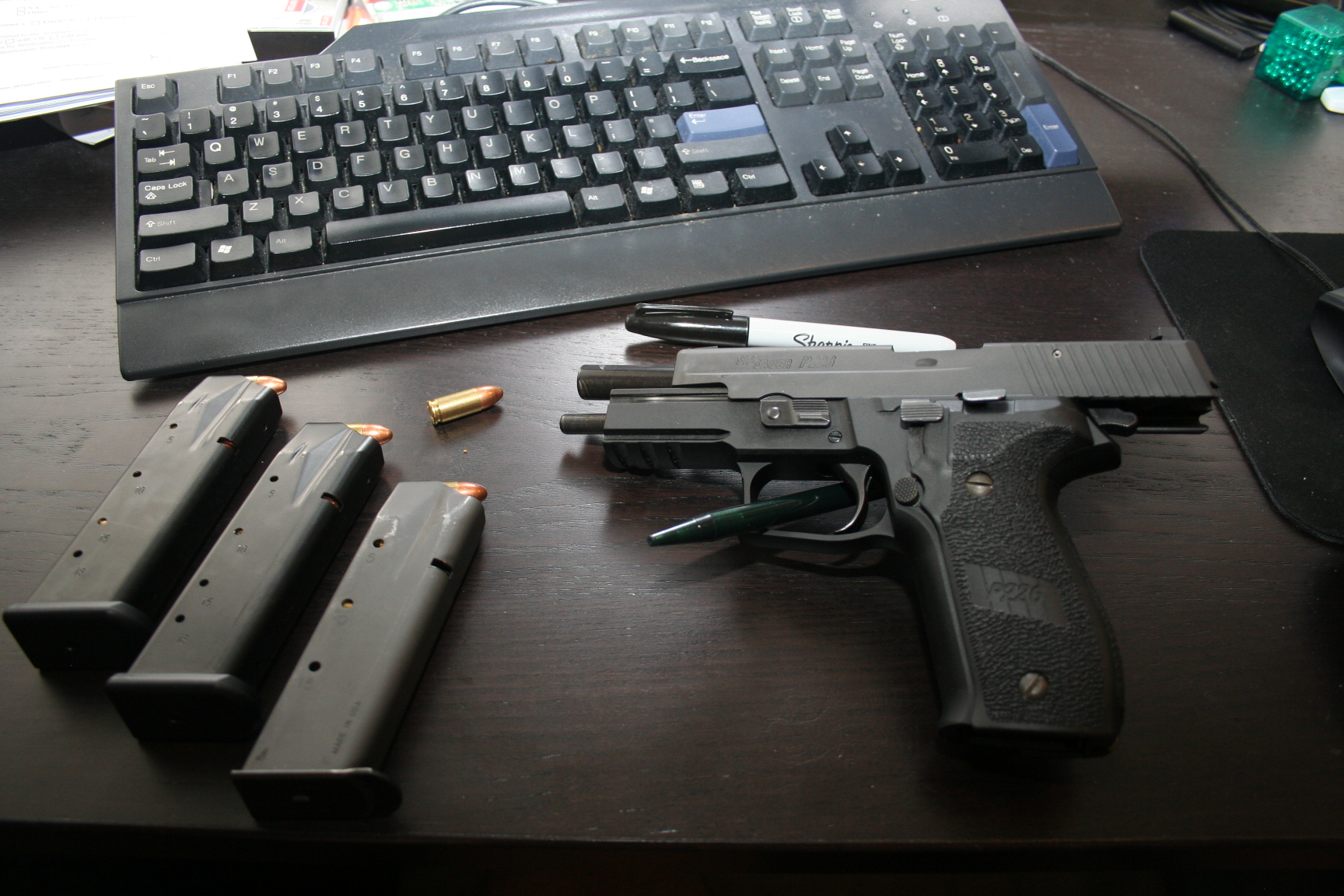 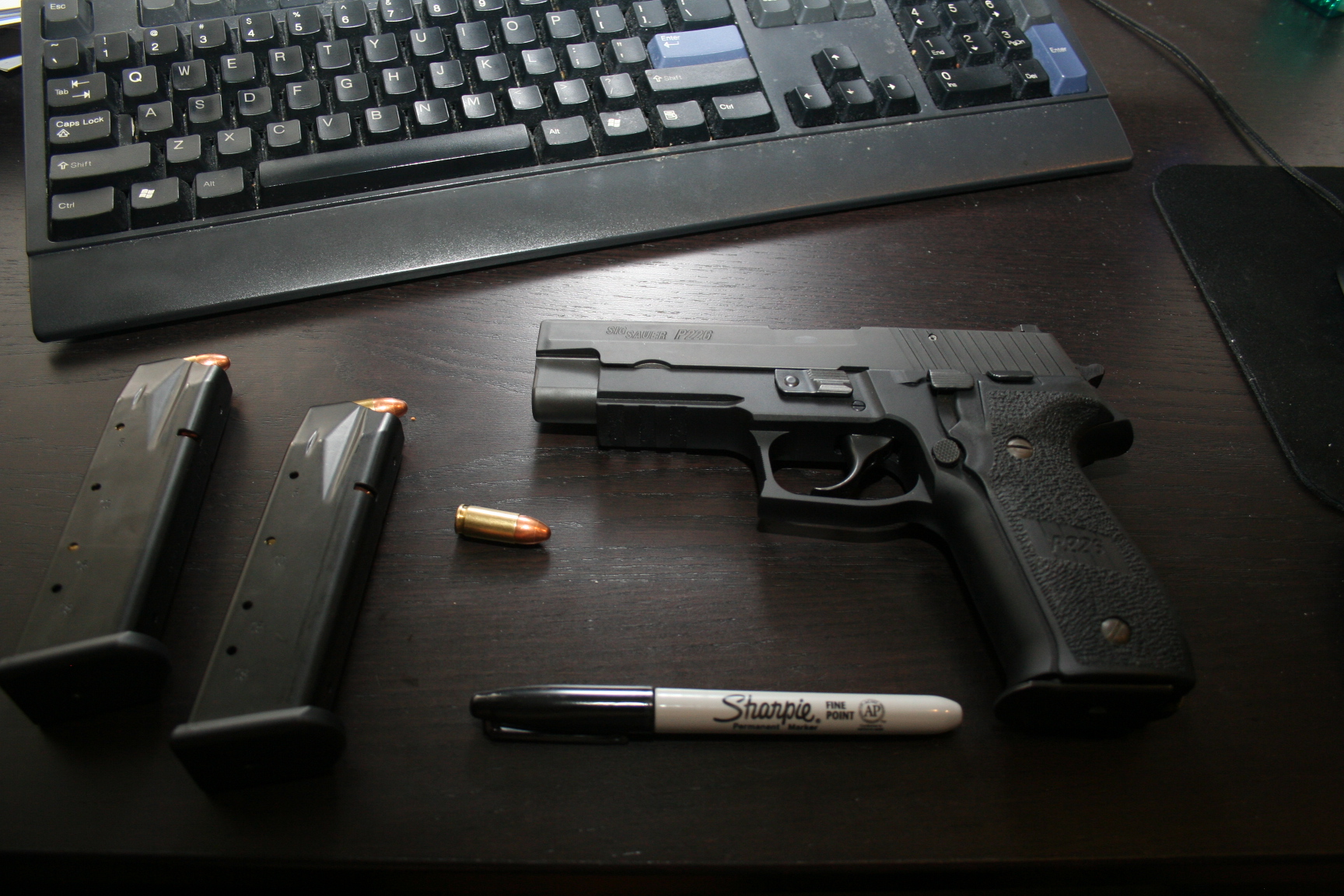 sig make some really nice guns, but they are pricey. glock and the springfield XD and XDM lines are the standards for polymers. Glock in itself is a standard, though i'd argue they're not as good as the XD line in any way.

polymer means much of the gun is made of hardened plastic instead of steel. This has its pluses and minuses. on the good, the gun is lighter and cheaper. on the bad, the steel upper is a lot heavier than the plastic bottom so it is not very well balanced. most new glocks and springfield XDs are in the $500-600 range before taxes and fees, and the XDM is ~550-650.

9MM and .40 are the standard semi rounds. 357 and 44 are the standard revolver rounds. they all hit like a truck with the right ammo and all could drop a man charging you with hits to the chest.

.40 versus 9mm... 40mm is noticeably bigger, however with hollow point rounds the size of the bullet when mushroomed inside someone's body is roughly the same. They can actually do roughly the same amount of damage. a .40 gun is definitely cooler to own than a 9mm, but dont let that fool you. a few hollow point 9s to the chest would definitely drop anyone coming at you. imagine a half dollar exploding in your chest, because that's basically what happens with hollow point rounds.

i have almost no experience with revolvers. only shot 2 ever. they are fun, super easy to use, super easy and fast to reload, and can be real cheap. mechanically they're not much to them.

back to semis...there are a few different things to look at. we've briefly gone over caliber and polymer vs steel. next is safeties. I do not like manual safeties. I know i could get used to flipping a safety switch before firing to the point where i do it automatically (muscle memory), but i really prefer the ability to pick up a gun, with either hand, while falling out of bed, hanging upside down, and get a couple shots off.

This is possible thanks to newer trigger and grip technologies. Glock introduced the trigger safety when it debuted its glock 17 exactly 30 years ago. Since then it's been copied by a few companies (like Springfield for it's XD line of Glock clones). This trigger safety system consists essentially of a trigger within the trigger. the actual trigger and a safety "trigger" sticking out the middle, and it naturally rests further out/away from the handle of the gun. The trigger cant be pulled all the way back unless the middle safety "trigger" is also pulled back. this helps eliminate accidental firings due to snags of clothes or mishandling. see pics


Other safety features that allow the absence of a safety switch include internal locking mechanisms that prevent firing when dropped (glock also invented this), firing pin safeties that prevent the firing pin from striking the chambered round (also Glock), and grip safeties that require you to be holding the gun normally. Grip safeties are integrated into the rear of the grip where the part of your hand between your thumb and pointer finger rests when held normally (see the pic of my gun above). they are levers that are required to be pressed for a successful firing. when the grip safety is not pressed, the firing pin safety is engaged and the firing pin's physical path to the back of the bullet is obscured.

These safeties are some reasons why i chose my XD9. to fire the gun, all you have to do is pick it up and pull the trigger. If your finger isnt on the trigger, the trigger stops halfway. If your hand isnt properly on the gun, the firing pin can't hit the back of the round. either one will stop the bullet from firing, while both ensure redundancy. The beauty of this is that as long as a round is chambered and the gun was cocked, it will always fire when it's in your hand and you pull the trigger. the bad is that these features mean the gun can't have a cockable/external hammer. hammers look fucking badass and make a scary sound in the middle of the night when you cock it with it aimed at an intruder.

Now, this isnt to say that guns with manual safeties aren't safe. If the semi-auto has a hammer it's probably Double/Single action (meaning both double action and single action) meaning that when the hammer is decocked, the gun will fire but the trigger will have have more weight (harder to pull) and longer distance to travel before it fires. This is because the trigger will cock the hammer and then fire it. When the hammer is manually cocked, the trigger requires much less pressure before the shot rings off because it it doesnt have to cock the hammer. a decocked hammer makes most semis pretty difficult to fire off accidentally. they can require as much force to fire as a revolver.

You also know that if a gun's safety switch is on there is no way the gun will fire unless the safety mechanism itself fails. guns with hammers and safety switches are simultaneously more safe and less safe than the standard Glock safety model. More safe when the trigger is on, less safe when it's off. Some guns employ both a manual safety and a grip safety. that is awesome.