Comments and discussion on any and all topics.
Post Reply
123 posts

LOL my graph looked bad too and I'm 5-2 as well. Mostly because I moved a lot of players around. My current team looks nothing like my drafted team. I only have 5 players on my team that I originally drafted...
Gaming:

Nice pick up on Ellington (again). I was about to grab him.

It was a terrible week of Fantasy.
Gaming:

And yet I benched him this week.

And this is why I picked him up.

Kid is gonna be a stud for the next few years.
Gaming: 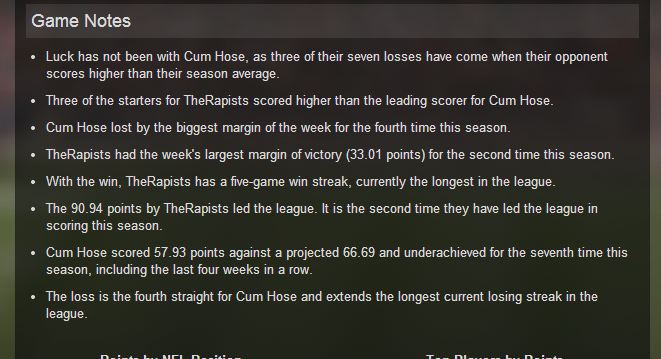 I now have the lowest points scored in the league....Sonic has scored almost 50% more points than me. Almost every player on my team has under-achieved the entire season. 4 of my first 5 draft picks were giant flops. 2 i dropped after 2-4 weeks after sucking terribly only to play well immediately after. my keeper and #3 pick have like 15 combined points all season, and i just dropped my keeper. #3 (Roddy White) isn't long for the team either.

I was so high on my team after the draft only to be as completely disappointed as possible. I had 3 top 20 backs, including 2 projected top 10, and I ended up dropping 2 of them for sucking ass/being injured. This has been the single worst season of FF of my career, and I played 3 leagues for 3 years straight.

Oh, not to mention I dropped Nick Foles after a terrible game in which had got hurt. Since Vick was the starter the next week i pick him up. he gets hurt in the first half and gets me -1.8 points. I lost that week by 1.5 points. Then of course Foles is cleared to play the following week and wasn;t available again by the time I had a chance to check fantasy that week. he then proceeds to score more points than my entire team.

I have made the wrong decisions for literally every move I've made this year. I feel like George Castanza....I should start doing the exact opposite of whatever I'd normally do.
Top

Don't feel bad. My draft was pretty shitty, then I had a few of my top players injured. But you know what? I picked up FA's and started winning games. Cut out the shit that doesn't work and start fresh.
Gaming:

I just wanted to say....there have been A LOT more season-ending injuries this season than any previous season I can remember. It's crazy. This has been the year of the free agency...

If anyone needs RBs, I have a bunch

Oh and I was looking at the FA's today and saw this dude....HAHAHA