Talk about buying cars, fixing them, and everything in between.
Post Reply
14 posts • Page 1 of 1

Been having some non-critical (so far) trouble with the Solstice for a few months now. It's been down on power and the turbo behavior has been weird. it feels like air is being held back or absent while under load, and then all of the sudden it kicks in. Basically it feels like an old turbo with bad lag. This car does not have noticeable turbo lag when healthy. Also, during WOT and high boost I can hear the sound of air moving incredibly fast and forceful. It's not the release valve/BOV and did not do this before.

Also, and I believe this to be a symptom of whatever is causing the above, there's a sudden delay after shifting like everything's in limbo, and then the car lurches forward a split second later. It feels as though the clutch is slipping or there's a more terrible driver behind the wheel than myself. This happens under 0 boost.

And then there are the smells. My sense of smell is terrible, and I'm bad at relating smells to objects. One smell that has been around for months could possibly be similar to burning brakes or ceramic. I could be mistaken. The other smell, which I just started noticing recently, is definitely eggs.

I had a mechanic check the clutch because at first I was afraid of burning it out. He said everything look good. He said he checked the synchro and the master cylinder (I believe he said the slave was very hard to get to and didn't want to get into that without my consent) and whatever else was easy to look at and said everything appeared in good shape.

The car has thrown absolutely no codes. The car drives, to most people, without any issues at all. The mechanic I left it with drove gingerly and didn't detect anything wrong. It wasn't until I drove that he saw what I did.

We finally had some good weather last weekend so I jacked it up and took a look at the intercooler:

Driver's side bottom of intercooler. 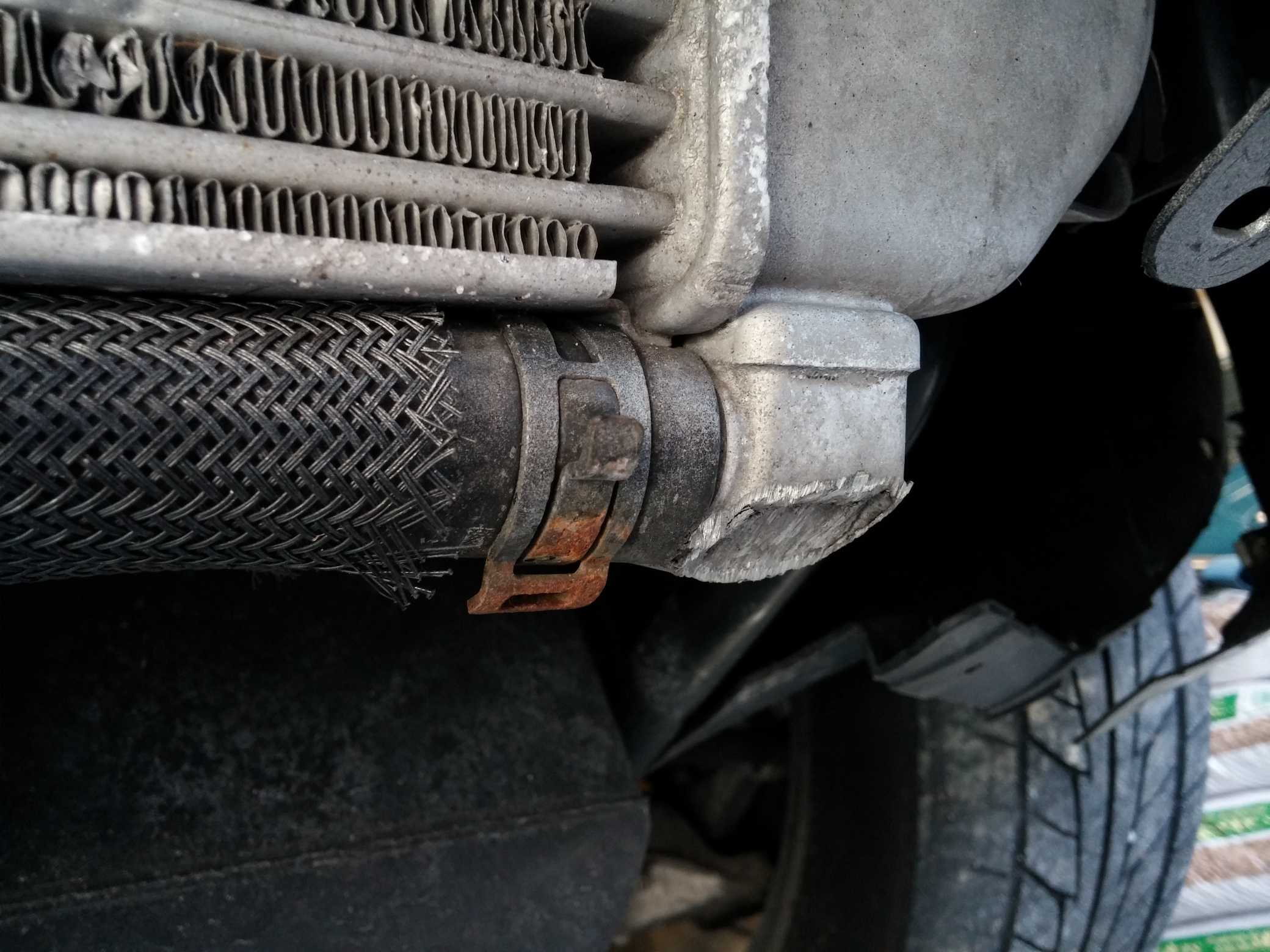 Close up. Dunno what those hoses connect to or do but I can blow air through those holes 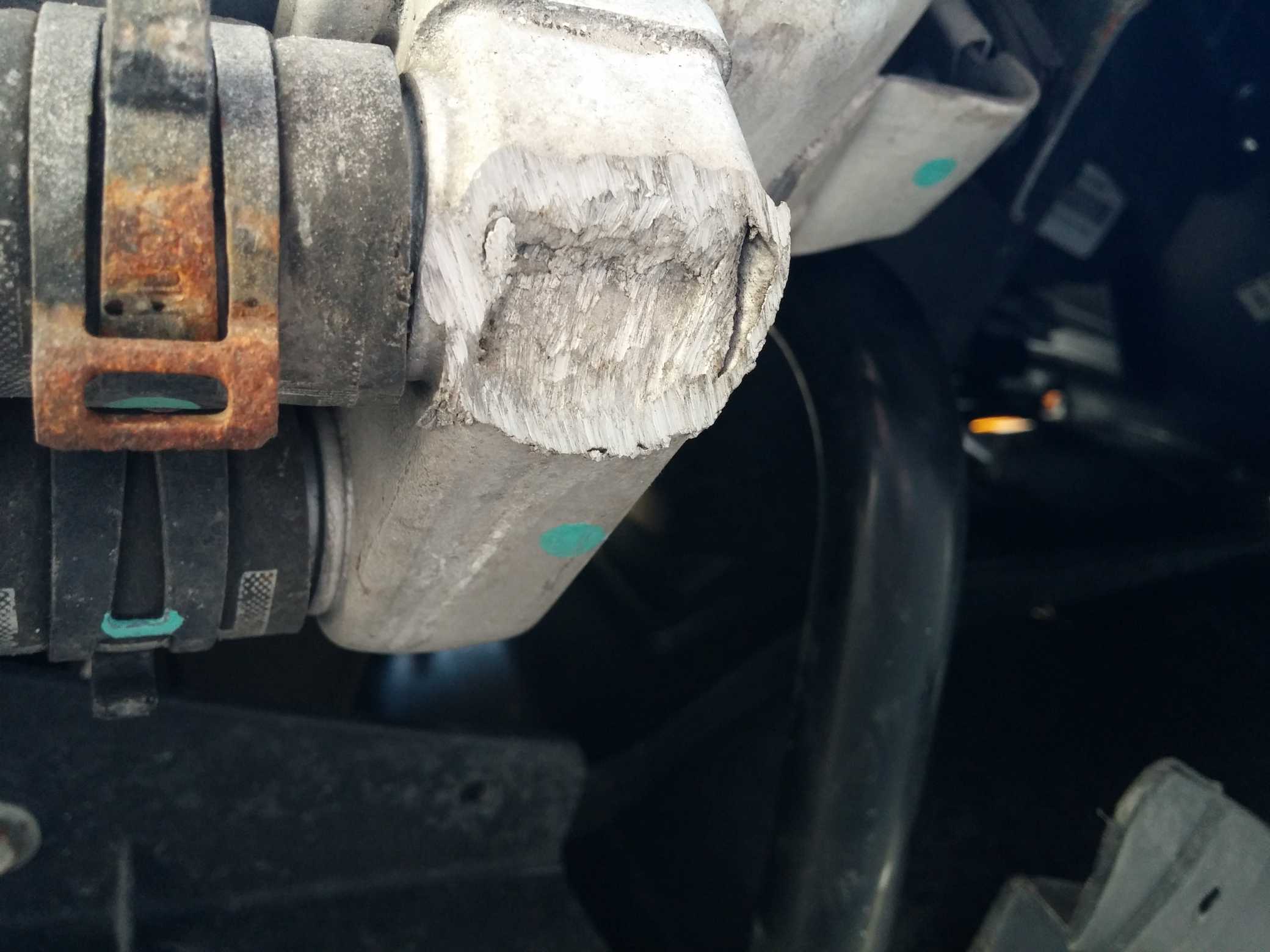 everything on the front of the car is damaged. it rides so low I can't even park over the parking concrete blocks. The car hits absolutely everything thats on the road. I hit a dead rabbit doing 80+ that couldnt have been more than 6" off the ground. I also ran over the tire tread of an 18 wheeler that was in the middle of an I95 on-ramp in philly doing 40mph, and there was no way to avoid it. 3 vehicles in front of me drove over it and didn't need to swerve as they cleared it entirely, so i didn't even know it was there. Well it got stuck under my car and I had to pull over and back up to get it out. 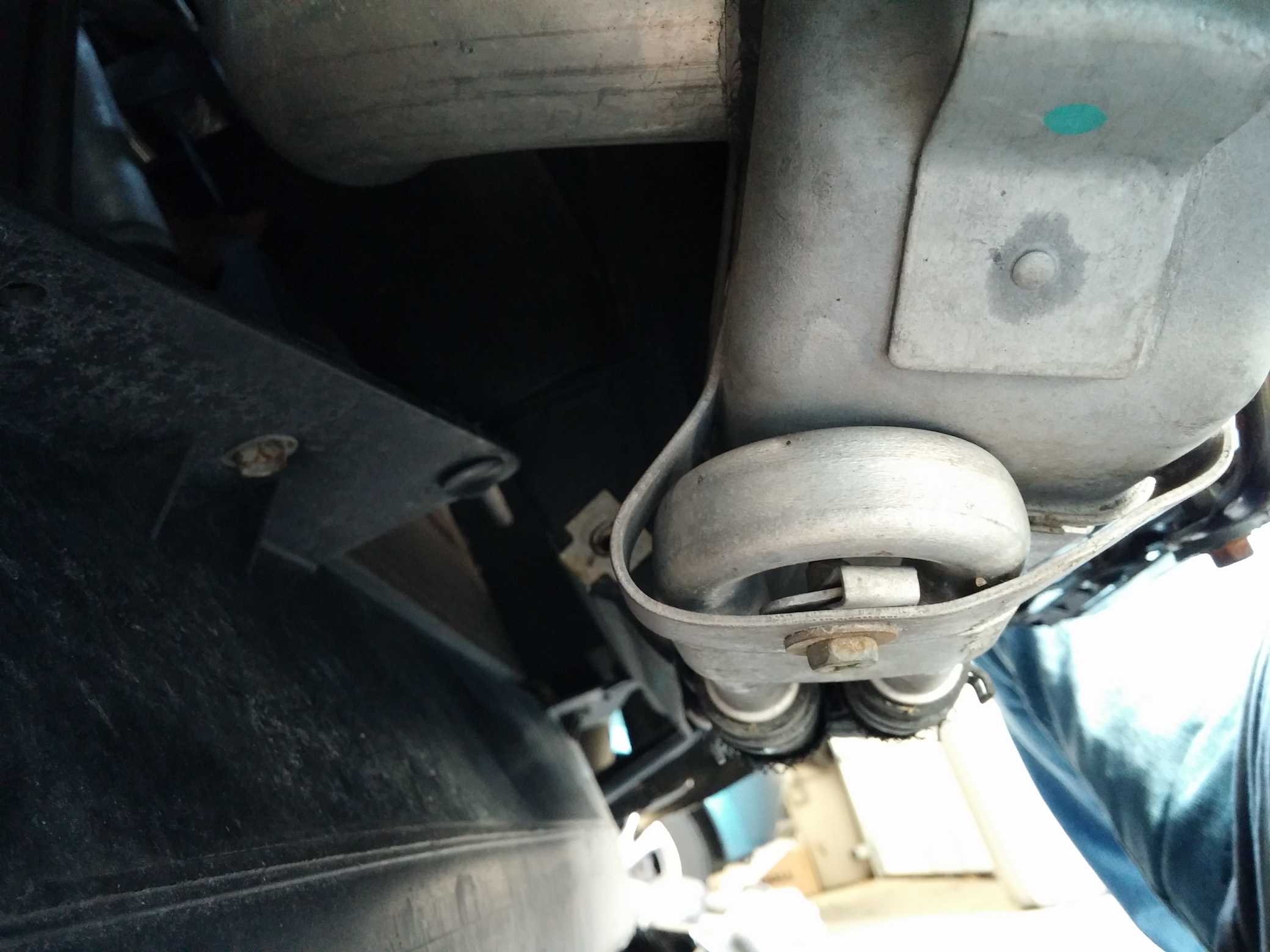 
so obviously there's damage to the Intercooler. I don't know if it's damaged anywhere internally or behind it, but a fair amt of fins are bent or damaged from debris. Should I get the holes welded closed and hope nothing else is functionally damaged? I can probably buy a used OEM IC for $100 or less. Is that a better plan?

ALSO- are these holes likely causing all of my issues? I'm going to repair this regardless, but does it sound like something else could also be wrong? I want to methodically repair the car, but want to prepare in case there's a huge repair bill coming.
Top

Judging by the pictures, there is a massive gash in your intercooler's side tank... and thats bad. The condition of the fins would be irrelevant as the tank area is open. When it comes to turbo charged engines, any loss of air is a loss of power and you have a significant loss of air.

When the air enters your intercooler, it is at a temperature that would be very unhealthy to your intake manifold and intake valves, thus creating the demand for cooling. The reason the air is hot is because it went through your hot turbo charger (duh) but mainly because your air has been compressed . The compression process causes the air to become very hot and needs to be cooled.

Now, if you were paying attention, you know that the air in your intercooler is compressed air and needs to stay that way right up until it's cramed into the engine. If it leaks out anywhere you are losing air compression (turbo boost) and that loss of boost can cause all types of problems, one being an alteration in the air/fuel ratio that could potentially overheat your catalytic converter and cause a rotten egg smell (it's all coming full circle now isn't it?).

Replace the intercooler then smoke test the intake with the air inlet blocked off near the air filter (before the turbo). Until you do this, take it easy on the engine. Your catalytic converter('s) do not like it when you fuck with the engines stoic ().

You have watched me smoke test Darkfoxx's intake when he had it in my bay. It is MUCH more important on your car for a proper smoke test to be performed and at a higher then normal pressure. Every little vacuum leak on your car is a loss of power. On Foxx's car, every little vacuum leak is a loss in gas milage and not a loss in power until the leak is significant. I have the equipment to do this properly and it would only take me a few minutes. The vast majority of garage monkeys do not know how to properly check your car. The turbo charged engine can be complicated and frustrating to work problems out of. Either bring it to me or find someone who ain't no jimmy boo boo.
I type a bunch of shit then people go fuk themselves
Top

Probably unrelated...but how is the air filter looking? Have you replaced or cleaned it?
Gaming:

Yeah it sounds spot on. Sounds costly though!

Replaced my battery yesterday (known it's been bad since late winter) and without having driven a full drive cycle yet it is running dramatically better. I didn't think a bad battery could impact a car much so long as it still powered shit, but once again it looks like i've been proven wrong.

crossing my fingers that this holds up.

I still have a boost like when near max PSI, but it's not too bad and may be related to the cracked piping connecting the air intake to the turbo. it's before the air is pressurized so i can't imagine it being the cause of boost leak, though.

Might have to spend some more time under the hood checking piping clamps again.

BTW if anyone needs a new battery Pepboys is running a $25 off $100 when u order online.
Top

ok ill try. have been having trouble with that bluetooth adapter. might need to replace it.
Top
Post Reply
14 posts • Page 1 of 1

Return to “The Garage”

Users browsing this forum: No registered users and 0 guests